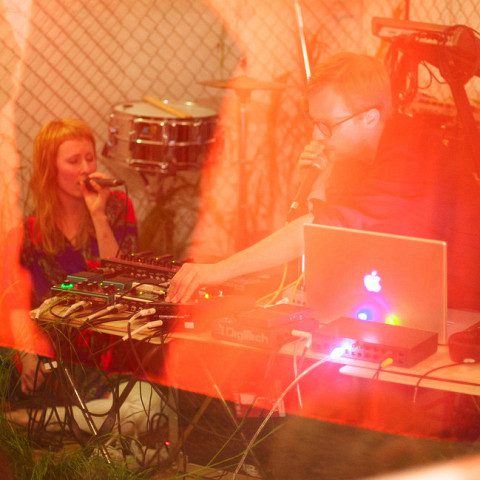 Notes:
This debut release has been made with the intention of representing the live sound of Spell. All of the tracks were recorded in one take. There is no post-production, aside from equalization and mastering.

Review:
“In the last few months alone, the local experimental-music scene performer Prophecy Sun has dropped Not for Dogs, her sophomore solo set of Theremin blips and murmurings; Dust, a collection of weirdo lo-fi folk from her Under the Sun project; and now Hex, the debut of her latest band, Spell. Fittingly, the duo’s first affair is as out-there as anything Sun has done in the past.

“Forest” kicks off the four-song effort with a series of electronic mosquito buzzes and wind sounds that serve to underscore Sun’s wordless, shamanic warbles. Untouched by the usual layers of reverb and delay that the singer employs in her solo work, her vocals come across especially sensually. “Just a Matter of Time” follows suit, with Sun embracing her inner torch singer atop busy synth squelches and a clanking, postindustrial snap beat. “Fading Away” strays from the EP’s minimalist beginnings, though, as Sun and sound artist Kristen Roos stretch out ethereal shushes and moans alongside washes of white noise. But perhaps the most effective track is closer “Break the Speed of Light”. A mix of dank, decaying dub beats, backward-tracked effects, it plays out like one of the gloomy transitional pieces that spiked This Mortal Coil’s back catalogue. Though we don’t get to hear the song segue into another Spell-penned stunner, considering Sun’s track record, the follow-up can’t be far off.”
—The Georgia Straight

“It’s not a battle, per se. The two forces at work on the album Hex tend to feel like they’re seeking balance, even if it’s more often the case that one or the other takes clear prominence. These forces are the voice of Prophecy Sun and the electronic processing of Kristen Roos. Together the duo record as Spell, which isn’t an inappropriate name for an act that offers a fair amount of enchantment. Hex’s first and third tracks, in particular, serve up a mysterious, haunting effect. And those, perhaps not surprisingly, are the ones where the vocals don’t so much take a back seat to the equipment as give themselves over to it, in “Forest” allowing for vowels to emerge slowly from a harsh thicket of white noise, and in “Fading Away” achieving a patina of madrigal-like antiquity. Both forces can be heard searching for a sense of solidarity, finding their most productive common ground when synthesis and voice merge into an attenuated aura. It isn’t just that the voice can overpower the vocals. There are moments, such as at the tail end of “Fading Away,” when it seems like someone turned on a video game, that it becomes clear the electronics are just as capable of imposing themselves on the process. The other two tracks on the recording, “Just a Matter of Time” and “Break the Speed of Light,” are ones where Prophecy Sun’s vocals don’t just take center stage, but the work of Roos coalesces into something more song-like. What’s especially promising for Spell -- this is their first collection of songs -- is that the album was recorded live. The liner note explains: “All of the tracks were recorded in one take. There is no post-production, aside from equalization and mastering.” Additional time working together, along with some studio-based fine-tuning, could yield something remarkable.”
—Marc Weidenbaum, Disquiet

“The word hex is defined as a magical spell placed on someone. It’s only fitting, then, that when sound artist Kristen Roos and artist/musician Prophecy Sun got together to form the experimental electronic duo Spell, they named their debut album Hex. The four-track EP is minimalist in production, with buzzing and wind sounds serving as the backdrop for most of the songs. The first track, “Forest,” is a perfect example of this. Hypnotic in its delivery, the track has Sun chanting some unknown language over beats that mimic white noise. The collaboration’s signature style stems from Sun’s ability to sing otherworldly over the experimental electronic stylings of Roos. “Fading Away” finds Sun’s voice, possessing divine strength, emerging from an electronic drone; but just as quickly as it appears, it is buried again by an overbearing hum. “Just A Matter of Time” carries more of a synth-pop beat, and takes full advantage of Sun’s sensual vocals. While the song’s lyrics suggest some impending doom, Sun’s voice somehow has a calming effect. Closer “Break the Speed of Light,” meanwhile, has her whispering instead of singing. Impressively, all of the tracks on the album were recorded in one take, which makes it no surprise that Hex was released with the intention of capturing the live sound of Spell. The raw creation process is sure to be the album highlight for fellow sound artists, but, above all, it demonstrates the duo’s collaborative chemistry.”
—Discorder Magazine