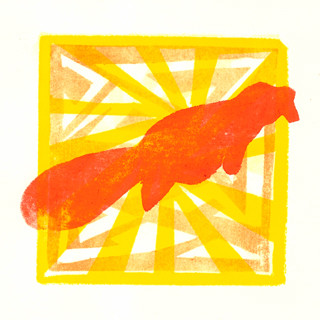 Review:
“Listen through the noise. Listen through, as if trying to see something hinted at off in the distance, through fences and trees, past throngs of people, well after dark. There’s something out there, for certain. And there’s something in here, here being the title cut of Castor Volant (by Darcin, born Nicolas Dion), a half hour of pixel sludge — and that’s a compliment, for the effort required to make something this thick and threatening out of something so infinitesimal as digital pulses — buried within which are fragments of melody. The melody arrives as brief snippets of what sound like backward-masked riffs, tense little moments that embody hesitation. Not only are they brief and quiet, but the backward sound has this nostalgic tinge. Toward the end of the half-hour-plus “Castor Volant,” the foreground noise recedes, giving those little rifflets a few minutes for the listener to get full sense of their fragile beauty. The second track is tough listening for an altogether different reason. It’s titled “Bonus Piano,” that piano — really piano by association, more like little individual synthesized tones — is rarely heard for more than a handful of quick notes at a time, before deep silence intercedes. This proceeds for over 10 minutes, during which the smattering of notes takes on the feeling of some indiscernible message. Closing track “Bonus Process” is a slow-dawn drone, like a church organist has gone Zen, and is just digging the sine waves of a single held chord.”
—Marc Weidenbaum, Disquiet

“Nicolas Dion aka Darcin’s release is an undoubtedly methodical listening because these three pieces used to unveil throughout 67 minutes. The compositions are quite disparate; especially the second track Bonus Piano is something of a cut-up sort, where silence is varied with very short, wispy sonic bits. Later on, all those bits will be subjected to unsteady wobbling. It would be interesting to know why the artist decided for the sake of this kind of composition. Given that I am just feeling myself fairly curious to know the rationale of such a sort of dividing line, however, the track is fabulous. Castor Volant is the lengthiest composition on it, unveiling its brilliant nature throughout a span of 33 minutes. It is the contemporary kind of drone music being in general produced for small tape imprints with small print-runs oftentimes residing at Bandcamp. Furthermore, it is the contemporary sort of minimalism while listening to this immense piece one can perceive tickling sensations coming out of those incessantly undulating waves, which will be broadening the more the 33-minute course reaches the end. In short, it is a gentle, in-depth psychedelic experience. Bonus Process could similarly be categorized as drone music though its accents are a little bit different. More profoundly, it is more abstract chiming like the sound of the engine of a space rocket having reached a very remote distance from Earth. Because of that it could be admitted to be a part of ambient drone music/space music. It is similarly captivating and laid-back though its method is set up otherwise. In a nutshell, the outing is a fascinating release, which even would predict the hype of analogue-based drone music some years before. It is mesmerizing how Nicolas Dion excels at producing and investigating minutiae within the soundscape.”
—Borealiscape, Recent Music Heroes