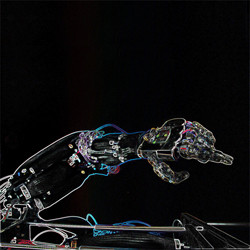 Track four was previously hidden on our website and only available by downloading the ZIP file. We’ve updated the release page to feature this rare live recording as an official bonus track that is now available for streaming as well. Recorded at Shambhala Music Festival on the 14th of August 2005.

Wow… I’ve never heard anything like this before. Suffice to say, he manages to touch upon all those genres mentioned at the top of this page (Jungle, IDM, Glitch, Experimental, Breakbeat) in the course of these 23 odd minutes. The common thread is the ornate, repetitive rhythms (sourced from what sounds like a cocktail of live, sequenced and processed drums) that build and morph as grooves cross stylistic boundaries and bang up against scraps of vocals, glitch, and each other. Utterly cool…” -Grant Partridge, Blue T-Shirt
We are at first treated to an intro consisting of weird and sophisticated textures: look, I’m abstract, says the intro, furiously waving his hands. Further down the spiral, or further up the ladder into a world of untold acoustic experiments: the intro proceeds to demonstrate via piano that dnb can indeed bemusical” (ho-hum: this was meant to be a joke!) and have non 4/4 time signatures. Nice panning work! The mix sounds a bit thin? I take back my words: the 3:40-4:40 segment has a nice warm, round sound. The elements are panned efficiently. The drum track is obsessed with gooddnb customer service”: live drumming, an orgy of fills, mixed with what sounds like synthetic percussions. I like. More compression? Maybe, to add that extra oomph, but that’s just me! Complex arrangements: it seems to me that the track itself springs from nothingness - the abstract intro - and then builds up, accelerando, into a huge high which isn’t cut off by the outro I was waiting for. I would like to hear this track, this type of track (I mean, with this type of production and arrangements) live.” -Punanny Bizniss, Montreal Drum n’ Breaks