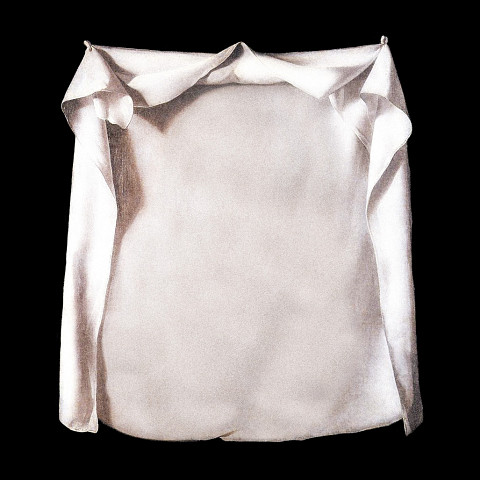 Refraction without the appearance of colour.

Reviews:
“Last week I wondered about the 12”, and here another one that has that format spins at 45 rpm, but it’s not really a dance record. Virilio (named after Paul, I wondered) is a duo of Corinna Triangafyllidis (tympani, tamtam, synthesizer, drum machine & voice) and Dimitris Papadatos (electronics, guitar, turntables, synthesizer, voice), who have been working together since 2008, ‘recording their Skype improv sessions under the moniker Cassettine and KU’. Since 2010 they call themselves Virilio, and this record was recorded in the Acacia (hey) Studios in Athens, in 2013. It proofs that, despite the entire economic crisis, Greece remains an active place for new music. This is the kind of music that easily defies any description, as it doesn’t seem to fit in any specific category. You can hear a bit of old school industrial music in here, partly improvised on the spot, using a bank of electronics, especially on the more more monolithic ‘Signature 2’ this seems to be the case, and on ‘Signature 1’ it seems to be more the case of noise, industrial music meeting up with a more carefully constructed bits of rhythm, also from the world of industrial music, but coming in from the end of techno - say the Pan Sonic side. Quite enjoyable if not somewhat similar these two pieces. It made me however curious to hear what else they have up their sleeve. Next time a full-length record, perhaps?“
—Frans de Waard, Vital Weekly

“Within this record Virilio marches us straight into a different sonic experience, a place were we are falsely greeted with a violin player who than is absorbed by dusty noise and lost clicks. As Virilio steers on we stopped marching and moved on to proceed the record from bird view. There we see a massive landscape turning up under our feet with stormy noise action and environmental elements that gives this audio collage great depth and also quite a height. It’s the things in sound that we cannot place but the mind seems to be familiar with by connecting it to forces of nature in an environment that on surface looks hostile for us humans, but from our perspective is an absolutely thrilling sight. Fields of lava, earth-plates with pieces of tropical rainforest and complete dried out savannas with small oases are beamed to my imagination. There is action in sound, that makes me visualize the running movements of cheetah’s in need for a new place to live. The soft glow in sound in the background draws up a red sunset that light up this soundscape where basically anything is able to appear as long as the user uses it’s imagination. To me this is a recording of the world of now, facing the same problems as the Dinosaurs did that lead to their ending but all viewed from a safe distance, making it an exciting and scientific enjoyable sonic journey for anyone who drank a cup of LSD instead of water. So if that is sounding of your interest and you are in to safe action in experimental audio with noise elements, than this might be something to check out.”
—Yeah, I Know It Sucks

“Side A is a dark, propulsive mixture of noise and blurred industrial rhythms--cavernous, echoing with siren-like wails, creating a very paranoiac feel. Very effective at conjuring up an oppressive swirling atmosphere, dense and resonant. Not really my personal cuppa, but well realized. Side B is more threatening still and is enhanced by a bed of rich consonance behind the skittering/gravelly surface. More pulse than rhythm, this track breathes much more convincingly, hovering with menace for several minutes before evaporating into whines and bell sounds; very nice. For fans of dark electronics.”
—Brian Olewnick, Just Outside