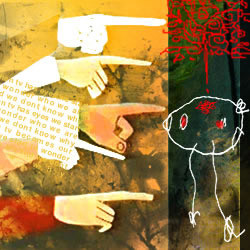 Hailing from Denver, our friend Jason Corder (aka Color By Numbers, Juxta Phona, Off The Sky, Zen Sauvage) dons a new guise for Panospria! As Aeris Ash he presents a series of textural works formed from thousands of field recording snippets played randomly.

Review:
“Random Process MP3s: Aeris Ash has a recent four-track release, the comically titled !@#&%!, which zigs and zags, jumps and bounds, from one short sound snippet to the next with such vitality that the overall effect resembles an old Carl Stalling score, one of those hyperkinetic orchestrations that so perfectly matched on-screen cartoon antics. To hear Ash’s music is to imagine what Stalling might have done, had he restricted himself to the found sounds of musique concrete — and had a laptop available. The opening track is all minute blips of whirs, noise, out-of-context buzzing, spliced together to impart maximum disparity from cut to cut. Other tracks include longer stretches of tonal material, as well as spoken bits. One sounds like someone’s attic is being tossed down the stairs a few items at a time.”
—Marc Weidenbaum, Disquiet