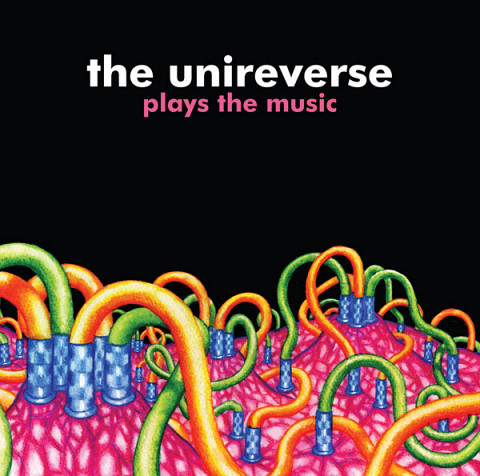 There are two kinds of people who will want this CD. First, there are those who are already familiar with The Unireverse. Those connoisseurs should only need to know that this, finally, is the band’s debut CD (following, true enough, a pristine pile of limited edition CD-Rs), that it contains four favourites from their numerous live performances as well as four unreleased jams, & that the whole thing sounds amazing, thanks to the band’s rich & meticulous production, complemented by Paul Dolden’s all-knobs-up mastering. Not to mention the priceless cover art by Montréal cartoonist Rupert Bottenberg.

As for those who don’t know The Unireverse… Well, are they in for a surprise. Imagine three guys who just wanted to infuse all the science-fiction they could muster into their music. Imagine that their instruments consisted in a bunch of analog synthetisers & some drum machines which they play in total fizzed-up/fuzzed-out fashion. And be warned: they like to make covers of famous songs. As well as ones you might have never heard of before. Not that they’re going to snub you if it happens to be the first time you hear that Brainticket song, for instance. (Though they’ll probably consider their mission accomplished if it makes you want to hunt down the original.)

With The Unireverse, past & future collide into a musical uchronia, the island of Montréal is towed away in the vicinity of Saturn, & in the process, the most wholesome stoner album we have heard in a long time is yours to behold. Trust me. These guys are for real.