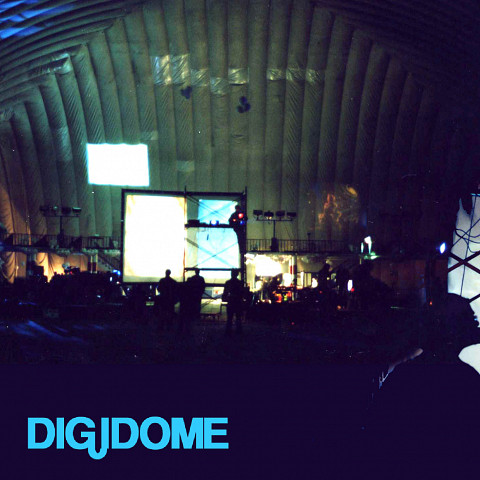 Spine-tingling psychoacoustics, glitches that open abysmal dungeons, and absurd cross-cultural collaborations comprised the very special night of audiovisual immersion known as Digidome. In a voluminous inflatable golf dome in Saskatoon, Saskatchewan, a pan-Canadian cast of exceptionally talented and creative audio artists joined forces with a juried international selection of videos and video artists to create this quasi-legendary event. Here, BricoLodge presents the long-awaited surviving archives of live performances by vitaminsforyou, Camp, A_Dontingy, Laura Kavanaugh and Ian Birse, and A_Dontigny’s jaw-dropping DJ/live set at AKA Gallery at the Digidome after-party. Unfortunately, the performances by liminaL Projects, Carrie Gates, and duul_drv, could not be with us today, but they survive in fond memories of those who attended this one-time spectacle of live experimental sound, glitch-pop drama, and new media madness. Furthering the otherworldly, lunar colony quality of the golf dome environment, five of the best video projectors in Canada were utilized to throw gorgeous video projections all over the walls of the dome, freestanding screens, and even set into motion as one of the projectors hopped on the back of a disco ball motor to send its messages around, and around, and around the dome…This event sparked many of the friendships that set BricoLodge in motion, spurring even more collaborations and events such as Phantom Power in North Bay, ON. Presented in 2002 by Saskatoon artist-run centre, paved Art + New Media, the event was organized by Dermot Wilson, Ellen Moffat, Carrie Gates, and Jon Vaughn.

All performances recorded live at the (RIP) Ramamda Golf Dome (except 6-8), September 2002.