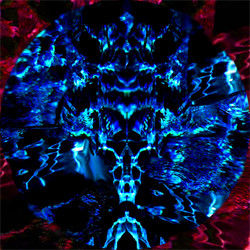 Next stop Toronto for the organic, lo-fi ambient of multi-instrumentalist Aidan Baker.

“Aidan Baker builds tracks out of guitar tones and, usually, his work is much more ambient and long drone based. He’s still got the proper distance perspective on Tense Surfaces but there is a percolating, shuffling loop in the foreground that keeps the tracks fluid and in motion. “Eyes Are Dark &" flows like dark water, undulating endlessly past you, while “Encase/Enclose Me" opens with the sound of a first year student’s piano recital being held underwater. Tiny bursts of electronic detritus scatter across the landscape of muffled and marred notes. The final section of Tense Surfaces is the thirteen minute “I Wish Too, To Be Absorbed" and Baker’s lo-fi ambience whispers of wind through old metal tubes and distant coyote calls in the desert darkness. Breathes of glitch like meteor showers streak across your speakers, slicing the drifting loop of Baker’s dusty ambience with streaks of falling noise. Tense Surfaces is an active departure from the glacial movement of Baker’s earlier work that I am familiar with and is a very delightful surprise." -Mark Teppo, IglooMag

“New net-release by Aidan Baker on the label Panospria. Two lengthy tracks, totally his way, and the instruments are: electric guitar, cymbals, vocals, drum machines and tapeloops. Maybe by now the most important question for the new music by Aidan Baker has become: does it (still) deliver the goods? I think it does here. The first more lengthy track of almost 20 minutes starts sounding more like his band Mnemosyne, as far as I know, more in a post/space-rock style. It goes like that for 10 minutes and then it changes into droney ambient for another 10 minutes. Maybe a bit long, but effective. Similar thing happens in the other track ‘I wish too, to be absorbed’, but now it’s cut to 13 minutes, which is a better length for this music I think. Here the first motive goes for about 5 minutes and then it changes into a nice repeating loop, which unfolds slowly by adding layers of gentle sounds till the end. Absorbing in a nice way." -Boban Ristevski, Vital Weekly

“Now, as I sit back down, I’m suddenly listening to Aidan Baker “Eyes are Dark &" and “Encase/Enclose Me" from the Tense Surfaces release. The latter is a good old sonic acquarium, with loopy pianos swimming through kelpy scrolls of ripples and blips. The former is a 16 millimeter trip through the corridors of HeavenCorp while a robot assembly line works behind the scenes, in funky perpetual motion, manufacturing the thick, steamy clouds through which you trip." -Zeno, Hollow Tree Experimental Music Report

“Canadian ambient and experimental guitar whiz Aidan Baker unleashes this wonderful sonic excursion. Guitar with submerged beats and sounds underneath in a lo-fi production package. Relaxing and inventive, this is a great soundtrack for inner travel. What are you waiting for?" -Dodds Wiley, Ambient Bulletin Board